Ordinary relations of any rank are relations that relate a number of ‘things’. An ordinary relation of rank N, being either unary, binary, higher order or of variable order (in time) relates N things together. In the semantic modeling approach the relation is considered a separate ‘thing’, which means that in an N-ary relation there are N+1 ‘things’ involved: the N related things and the N-ary relation itself. This is illustrated in Figure 1. 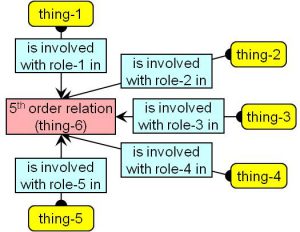 Thus in the semantic modeling approach, any molecular relation (of any rank) is an ‘object’ in its own right and to capture the semantics of the relation, every relation shall be classified explicitly. This holds for binary as well as higher order relations.

Especially higher order as well as variable order relations (N-ary relations) can be represented as ‘objects’ that are classified by kinds of relations, whereas each of them is related by a collection of binary atomic relations to the involved things.

The document ”Modeling of Activities and Processes” (and state changes), part 5 of the Gellish Modeling Methodology is based on the above approach.

In other words, many entity types are artificial groups of natural (binary or higher order) relations and usually they are not ‘natural’ higher order relations.

You can find out more about which cookies we are using or switch them off in settings.

This website uses cookies so that we can provide you with the best user experience possible. Cookie information is stored in your browser and performs functions such as recognising you when you return to our website and helping our team to understand which sections of the website you find most interesting and useful.

Strictly Necessary Cookie should be enabled at all times so that we can save your preferences for cookie settings.

If you disable this cookie, we will not be able to save your preferences. This means that every time you visit this website you will need to enable or disable cookies again.